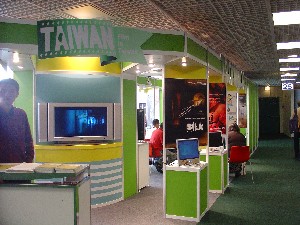 On the blue beach of France in the morning of May 17th, the red carpet rolled out on the steps of the infamous Lumiere Theatre. The pyramid of the film “The DaVinci’s Code”, along with the bright sunlight has announced the official opening of the Cannes Film Festival. Palais square right next to the Lumiere was flooded with film merchants, all patiently waiting to be checked by security, and begin their important annual “meeting” – Marché du film. This market is an important platform for international filmmakers to find funding and creative partners. This year, the marché have filmmakers from 69 countries, 3484 film companies, and more than 1600 film buyers. Of all the films that will be screened during this marché, the biggest portion is from the U.S. taking 26%, then it is French and English films, taking 16% and 12% respectively. Half of the films being marketed in the marché are completed, the other half is still in production.

Taiwanese films are not absent from this marché. GIO’s “Taiwan Cinema” has a booth beside the café of Palais, a location that is eye-catching. This year’s “Taiwan Cinema” uses the Taipei 101 building and traditional rice patty as the image for the promotion. Within the booth, there is the exclusive sponsorship of BenQ with the audiovisual equipments, Joybook laptop computers, and two LCD monitors.Besides, the GIO for the first time cooperates with Electronics and Optoelectronics Research Laboratories at the Industrial Technology Research Institute. The films into advanced FVD(High Definition Forward Versatile Disc) format. The system will serve to screen Taiwanese films at the market.

On the opening day of “Taiwan Cinema”, international filmmakers have come to visit, including international film festival curators from Venice Film Festival and Nantes Three Continents Festival. Film buyers from Hong Kong, Singapore, Malaysia, Thailand, Holland, and the prestigious American film magazine “The Hollywood Reporter” have all come and showed their interest of the Taiwanese film industry. The most recent production “Silk”, starring Big S, Chang Chen, and Eguchi Yousuke from Japan was the most inquired. Everyone is hoping Taiwan cinema to shine in 2006 Cannes.