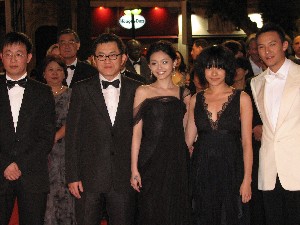 The premiere of “Silk” –the film selected in the Official Selection Feature Film in Cannes Film Festival, was held in the Conference Hall in midnight of May 24th. Director Su Chao-Pin, actors Chang Chen, Lin Jia-Xin and Big S were dressed formally to walk the Red Carpet to show the most glamorous side of Taiwan Cinema. Among the participants are the film distribution company led by Tu Ming, the crew, and Taiwanese representative in France Yang Zi-Bao, GIO representative in France Tian Yong-Kang and Peggy Chou ,the director of the Department of Motion Pictures of GIO all presented to complement the success of Taiwan cinema. Silk’s opening ceremony is the first midnight showing of this year’s Cannes Film Festival. The hall was crowded with audience. Other than French fans, actors like Michelle Yeoh, Zhang Xiao-Hui, Mainland China director Wang Chao, and many filmmakers from China, Hong Kong, and Taiwan have all participated in this event. At the end of the premiere, the audience has applauded several times. They all believe that this film has unique commercial value. Silk is written and directed by Su Chao-Pin. The production cost is roughly NTD200 million. The story is about Eguchi Yousuke leads a supernatural research team and caught a ghost boy. He then invites detective Chang Chen to assist in finding the boy’s cause of death. Eventually they find out the tormented relationship the boy shares with his mother. The film uses an immense amount of computer graphics to display chilling effects. The young idols like Chang Chen and Big S have all spoken Chinese, English, and Japanese in the film. Their potential and talent are expressed well through the film.