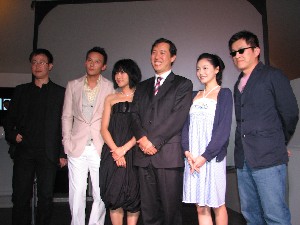 The “Taiwan Night” sponsored by GIO is held at the night of May 25th at the Majestic Barrier in Cannes. The party is to applaud “Silk” being chosen as one of the Official Selection Feature in the Cannes Film Festival and to promote the 76 Taiwanese films from 45 production houses.

The evening began with a “Taiwan Cinema Montage” produced by GIO. The 5 minute short film is to introduce the images of recent young directors and actors and tax benefits and subsidies for the film industry in hoping to co-produce films with international filmmakers.

The evening then continued with a speech from the Taiwanese consulate representative in France, Dr. Yang Zi-Bao, as the host of the evening. He welcomes everyone to this gathering in Cannes to celebrate the glamour for the cooperation of international films. Finally, he thanked all the guests for attending the evening to provide an international exchange of possibilities for Taiwan Cinema to work with the rest of the world. The evening was enjoyable to all the guests who have enjoyed the food and music, The party ended at one o’clock the next morning.