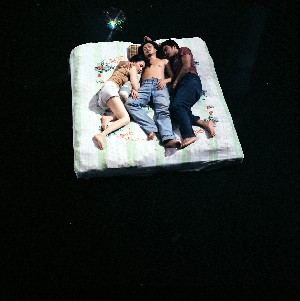 The 63rd Venice Film Festival recently unveiled its line-up of competition films. “I Don’t Want to Sleep Alone” by Tsai Ming-liang is selected in the list, being the only Taiwanese film in this year’s competition.

“I Don’t Want to Sleep Alone” is the third time of Tsai being selected at Venice Film Festival. Tsai’s first entry “Vive L’Amour” won the highest prize Golden Lion Award in 1994. In 2003, his “Goodbye, Dragon Inn” took home the Fipresci Award. This year, Hong Kong director Jonnie To’s “Exiled” is another film from the Chinese-speaking world selected in the competition line-up. Tsai and To, together with all other 19 filmmakers, will be vying for the Golden Lion in September in Venice.

“I Don’t Want to Sleep Alone” was funded NT$ 8 million by Government Information Office’s (GIO) Subsidy of Film Production in 2005. Besides GIO’s subsidy, it is co-funded and co-produced by Taiwan, France and Austria. The film also marks Tsai’s first film returning to his homeland Malaysia for the shooting.

Set in Kuala Lumpur, the film tells about borderline people of different races drifting by the edge of the city. Actor Lee Kang-sheng plays two roles, a vagabond and a vegetable. Actress Chen Hsiang-chih plays a waitress in a teahouse. Through the developments of the character, the story depicts a mutually dependent relationship in the adverse environment, and expresses each character’s yearning for freedom and love.

Tsai, who was just informed of the news, said “I Don’t Want to Sleep Alone” is the most mature film among his works and it may be the most accessible film as well. Although he had encountered anxiety and depression during the shooting, the result of the shooting is a satisfying work.

In September, Tsai Ming-liang will bring actor Lee Kang-sheng and two Malaysian actors to attend the Venice Film Festival. It is hoped that following last year Ang Lee’s taking the highest honor, Golden Lion, Tsai, as another filmmaker from Taiwan, can again shine in Venice with “I Don’t Want to Sleep Alone”.