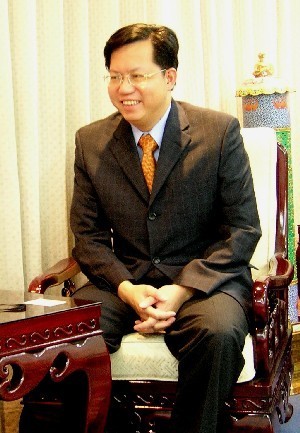 In the first 300 days of his post, Cheng Wen-tsang, minister of Government Information Office (GIO), participated 10 premieres of Taiwanese movies, eight openings of various film festivals held in Taiwan and 10 more film related press conferences. He also visited South Korea, visiting film and TV policies in Korea. Using his firm actions to support Taiwan cinema, minister Cheng plans a series of policies for future development of Taiwan cinema. These policies not only focus on immediate reform actions, but also look out for the future. They are designed to maintain a sustainable prosperity for Taiwan cinema.

Combining film and TV, making an entertainment November in Taiwan
Cheng talked about the ongoing 2006 Taiwan International Film & Television Expo (TIFTE) at the beginning of the interview. The series of events at the expo, including Golden Horse Awards, Asia Pacific Film Festival, Golden Bell Awards, Taipei Film and TV Festival, the executive committee convention of the Alliance of International Film Archives, and the 50th anniversary of Taiwanese-language cinema have opened one by one this month. Among them, the Golden Horse International Film Festival and the screenings of Asia Pacific Film Festival are zealously welcomed by moviegoers. The Golden Horse package tickets were sold out in two hours after the opening. The Asia Pacific Film Festival has also received unexpected attention. The screening tickets are designed as free give-outs by requests. So far, the advance tickets were completely given out. Only limited numbers of tickets were left and the audience needs to queue at the cinema to see the movies.

Comparing the two film festivals, Cheng said, The Golden Horse showcase are market-oriented while Asia Pacific films are cultural-oriented. The content of the movies have thus distinct features. For example, at Asia Pacific Film Festival there are films from various countries that can be seen as epitomes of different cultures. They deserve special attention from the audience, Cheng said.

Throughout these days, it seems that organizers of both Golden Horse and Asia Pacific Film Festivals are competing against each other. “But both events are sponsored by the GIO. And they are both international-leveled film festivals, representing Taiwan and welcoming the participation of international friends,” Cheng said.

Accumulating talents, resources and funds
Besides film screenings, The 2006 Taiwan Film and TV Expo also contain other important events, including Taipei Film and TV Festival and the Annual Convention of the Alliance of International Film Archives. The Taiwan Film and TV Project Promotion of Taipei Film and TV Festival, for example, is an event that provides a platform to match funds with investment targets. This is a platform for quality film projects and scripts and quality production teams to find funding resources.

Commercialism plus humanism – the future direction
Talking about future directions of Taiwan cinema, Cheng first began an analysis on Taiwanese film market. He finds that Taiwanese audience prefers Hollywood movies. The Hollywood industry operations rely on the global film market; therefore it can afford to produce large productions abundant with special effects. On the other hand, the Taiwan film industry is good at making films rich with humanistic qualities, which have been winners of major international film festivals.

Based on Cheng’s observation, the average production size of Taiwanese films in the past has been set around NT$30 million. With such a production size, it is difficult to produce highly commercialized or blockbuster films. But in the recent years, a few Taiwanese films are produced according to the Hollywood model, and they have received considerable box office gross, such as recent film “Silk”. Therefore, Cheng believed that the humanistic film tradition plus commercial elements should be the right developing direction for Taiwanese films.

Based on such a developing direction, Cheng began to a planning on future film policies. In terms of commercial films, the GIO has planned a “Strategic Film Investment” project, which will make use of Development Funds, Mid-and-Small Sized Enterprises Credit Insurance Fund as parts of the more flexible film financing schemes. This guarantees the output of more commercial movies that will meet with popular demands of the market.

As for the traditional policy -- “Subsidy for Film Production”, the fund will be given solely to art-house or humanistic movies. Minister Cheng argued that the old film production model in Taiwan is the so-called “director-oriented model” -- a movie made by a film director is seen as his/ her “work”. In the future, however, the filmmaking model should go towards “producer-oriented model” in which movies are seen as “products”. In either financing or script-writing stages, Cheng said, film production should go commercialized. The movies are not just arts, but also parts of the entertainment and cultural industry. Taiwanese filmmakers should let the industry resume its industry scale.

Trainings and educations for future filmmakers
Besides financial policies, minister Cheng also pointed out the importance of developing film talents, especially in exploring filmmaking materials and training creative talents. The GIO has provided means to discover and recognize filmmaking talents, such as Creative Stories Competition, Outstanding Film Script Competition and Golden Harvest Awards for film and digital video.
The GIO has begun close cooperation with university film departments, to strengthen the training of film talents by using school resources. Except for filmmaking and writing talents, marketing talents for films are in high demands, especial for international marketing talents.

As Taiwan’s film market is rather small-sized, it is necessary for films to explore overseas market. Therefore, the planning, marketing and negotiation skills in the international film market become crucial for Taiwanese filmmakers. The promotion of Taiwanese films cannot be without management and marketing expertise and knowledge.

Cheng said if Taiwan’s high-tech industry can be successful, so can Taiwan’s film industry or cultural industry, as long as there is the right method. After all, Taiwan has the most diverse cultures and the most open society in the Asian region. Taiwan is one of the leading Asian countries in cultural tastes, and Cheng believes that in creative works, Taiwan should also endeavor towards a leading position. The GIO has endeavored, in the recent years, to cooperate with industry players and strengthen the loose links in the industry.

Movie education enters the schools
The Taiwanese audience has been heavily influenced by Hollywood movies that they care about sensational sound and lighting effects of a movie. They are less acceptant to slow-paced movies with realistic narratives. This is a dangerous thing, Cheng said, which will narrow the audience to a singular taste. And their sensibility towards movies can be twisted.

Minister Cheng pointed out that in the future, the GIO will take special efforts on audio-visual education and develop sensibility and appreciation of movies for elementary and high school students. The GIO will also work with university film societies to promote humanistic or art-house movies. Film appreciation is like reading, it takes a process of training. For Cheng, to provide education for the public on the appreciation of visual art works and to let them understand deeper meanings of the works is one important part of GIO’s future tasks.

In future, the marketing of Taiwan cinema will also involve cooperation with TV stations. There will be produced a regular TV program presenting trailers, behind-the-scene clips and director statements of local movies. For Cheng, this is a good marketing method to let Taiwan audience become more familiar with Taiwanese movies.

At the end of the interview, minister Cheng emphasized that it is not just Taiwan cinema that needs changes; the Taiwanese audience also needs to see something different. For this reason, “please remember to go to the movie theaters, to see Taiwanese movies!”