Glam and Glitz on 2006 Taiwan International Film and TV Expo 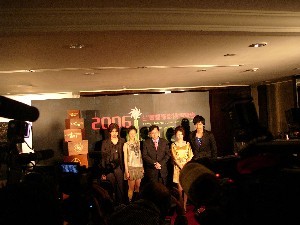 With the theme to uphold talents and excellence, the 2006 Taiwan International Film and TV Expo unveiled with a start-studded evening on Nov 22 at Taipei Grand Hyatt Hotel.

As the host of the expo, the Government Information Office (GIO) held a joint reception party for guests coming afar. They include Mark Harris, producer of Oscar-winning film “Crash” and participants of 7 subsidiary events of the expo – Asia Pacific Film Festival, Golden Horse Awards, Golden Bell Awards, Taipei Film and TV Festival, Taiwan Film and TV Project Promotion, the 50th Anniversary of Taiwanese-language films and the annual convention of the Alliance of International Film Archives.

The previously announced entertainment ambassadors of the expo, except for Chang Chen who is shooting in Shanghai therefore unable to attend the opening, have all attended the reception party, including actors Chen Bo-lin, Gui Lun-mei, Angela Chang and Mike He. Kelly Lin, public speaker of Asia Pacific Film Festival also joined in the lines of glittering stars, making a glamorous yet bustling opening party.

Cheng Wen-tsang, minister of GIO, as the host of the expo addressed on the purpose of such an integrated event. In order to boost Taiwan’s film and TV industries and to continue implement the policy to merge film and TV development in Taiwan, Cheng said the GIO held such an expo as a platform of exchange. Coming in its second year, this year’s expo contains series of film festivals and film screenings, symposiums and forums, markets, galas and awarding ceremonies. It is bigger and more plentiful.

The reception party was hosted by TV anchor Su Yi-hong and Janet. The opening talk in fluent English and Chinese was followed by a flag-and-drum circle performance. The dancers surrounded the party venue before taking the stage. After the drum show, five performers in traditional “Eight Generals” costumes showed up and gave an impressive “Eight Generals” dance. What follows was a fashion show led by designer Kang Yan-ling, who designed six sets of glamorous and embellished clothes to echo with the theme of the expo.

After a series of performances there held a “Magic Ball” inauguration ceremony. Minister Cheng, entertainment ambassadors and representatives of all subsidiary events each held an illuminant sword and lighted up the magic ball. The ball presented “Welcome to Taiwan International Film and TV Expo”, which sent another warm greeting to foreign guests. Following the ceremony, Taiwan’s prestigious Pili Puppet Show Troupe presented a Cosplay (costume play) of the troupe’s renowned repertoires, which brought to another peak to the party. Accompanied by dazzling lights and electronic music in the background, many guests at the party began to dance along with the music.

So far, the Taiwanese government has provided the “Development Fund of the Executive Yuan”, which will input NT$20 billion in five years on cultural and creative industry and digital content industry. By holding such an international expo, the GIO hopes there will be more cross-country cooperation projects established during the event period.