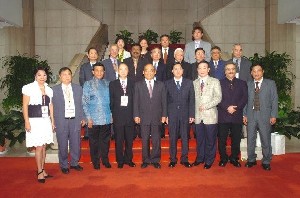 In Taiwan on November 24th, Asia Pacific Film Festival has reached its climax, the award ceremony. To show the hospitality and respect for distinguished guests from abroad, The Government Information Office not only held a grand welcome party on the evening of November 21st, the Premier of the Executive Yuan, Mr. Su Tseng-chang, also personally greeted fifteen heads of delegations from Jakarta, Hong Kong, Manila, and Sydney etc., alongside the minister of the Government Information Office, Wen-tsang Cheng, and Director Peggy Chou o f the GIO.

This event began with the Chairman of this year’s Asia Pacific Film Festival, Chien-Chao Yeh, introducing the distinguished heads of delegations from each country. Then Premier Su gave remarks to welcome these guests. Su states that he has loved going to the movies ever since he was little. Many of those movies were produced by Shaw Brothers. Therefore at this interview, he was happy to see Sir Run Shaw’s son who is also head of the Singapore delegation, Dr.Vee meng Shaw. Premier Su also states that he loved domestic and foreign films of any genre, and was often touched by the story and the happiness he has experienced when he was growing up. He wants to show his utmost respect to all the delegations for their effort and contribution to the film industry, cultural exchange and all the different aspects of the entertainment business. The Asia Pacific Film Festival has been established for several decades, he continues, the festival serves to encourage cultural exchange between nations, and to learn from each other’s work. After eight years, the 51st Asia Pacific Film Festival has come back to Taiwan, and on behalf of our nation, he would like to take this opportunity to reiterate his hospitality. During his remarks, Su has also mentioned that since the past, Taiwan has always encouraged the development of multiculturalism and respect different ethnic groups. This year’s award ceremony is held at the Taipei County Multi Purpose Hall, which was erected during his post as the Governor of Taipei County. The delegations visited Chiu-fen on the 23rd, where is a spot show the beauty of Taipei County. ‘Share with Friends’. He wishes that all the delegations can experience the beauty of Taiwan. He hopes that their stay in Taiwan is pleasant, the event is successful, and everyone can thrive at the award ceremony. He also gave presents to all heads of delegations as souvenirs, which are Hakka Wu-Tong flower china sets, and Taiwan Rare Fowl Bookmark.

The head of Jakarta delegation Mr. Raam Punjabi represents other heads states that all delegations are passionate for movies, and the festival unites them all. On behalf of the chairman of next year’s festival, he would like to thank our nation for organizing all the events of this year’s festival, and he invites Premier Su and Minister Cheng to join next year’s 52nd Asia Pacific Film Festival in Jakarta.

The 51st Asia Pacific Film Festival is held in Taipei during November 21st to 24th, there are 55 films from 13 countries in the festival, 46 of which joined the competition, all representatives from different nations are roughly 350 people, and next year’s host of the Asia Pacific Film Festival – Jakarta delegation has a group of 92 people. The events of the festival includes: Movie Poster Exhibition, Welcome party, Film Symposium, Joint Luncheon hosted by ministers, Jakarta Night, One day tour of Film Location Chiu-fen, and the award ceremony held at the Taipei County Multi Purpose Hall, hosted by Supermodel Lin Chi-ling and Jacky Wu.