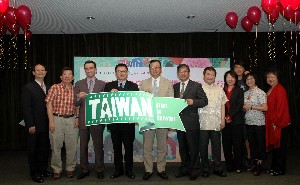 The Government Information Office (GIO) today (May 11) held a pre-departure press conference for the Taiwan delegation that will participate in the 2007 Cannes Film Festival and Market. GIO Acting Minister William Yih hosted the press conference and not only lent his encouragement to the 64 Taiwan films made by 44 production companies that will be participating in this year’s festival, but also expressed his hope that the films will make a name for Taiwan and fare well in the various segments. Anthony Chaumuzeau, the Counsellor for Cooperation & Cultural Actions of the French Institute in Taiwan was on hand, along with representatives of the production companies whose films will be screened in Cannes. Also in attendance was the chairman of the Motion Picture Development Foundation of the ROC, Chiu Fu-Sheng, Taiwan Television Enterprise Chairman Chen Ching-Ho, and the chairman of the Golden Horse Film Festival’s Executive Committee Shih Ling-Hui. Also present was Chinese Cartoon Production Co., Ltd. Chairman Deng You-li. Chinese Cartoon received government funding in 2006 to produce the animated feature “Mazu”. The vice president of Joint Entertainment International Lee Liang-yu was also on hand as was Island Etude producer Yang Li-yin and new generation actor Mingxiang Dong.

In remarks, Acting Minister Yih said that the 2007 Cannes Film Festival and Market will be held from May 16 to May 27 in the French city of Cannes. This year, the theme of Taiwan’s promotional campaign and literature will be “The Blooming of Taiwan Cinema.” The efforts of the government in nurturing and providing assistance to the film industry, as well as the work of industry participants has gradually helped Taiwan cinema to begin to stage a recovery, he said. In addition to the production of a wide range of films, the new films exhibit a creative vitality.

Acting Minister Yi said Taiwan’s three dimensional animated film production technology has matured significantly in recent years. Taiwan animated features are an up-and-coming force on the international stage. As a result, Taiwan is highlighting its animated films at this year’s Cannes Film Market, with films such as “The Adventures of Dragon Fruit”, ”So Long My Love”, ”Mazu”, and “Adventures in the National Palace Museum”. These outstanding animated films exhibit the progress made in the production of animated films on Taiwan. In addition to the rapid growth in technical expertise, the films encompass a variety of themes and boast a high level of vitality. The GIO has worked aggressively to assist local production companies in having their films participate in international film markets. This has led to a gradual increase in international cooperative productions here in recent years. Cooperative projects that will participate in this year’s film market include “Legends in the Tang Dynastry -- Nei In Jiang”, ”Blood Brothers”, and “The Red Balloon”. Of these, The Red Balloon, which was directed by Hou Hsiao-hsien, was invited to be the opening film in the Cannes Film Festival’s “Un Certain Regard” segment.

Chairman of the Motion Picture Development Foundation of the ROC, Chiu Fu-Sheng, said that development of Taiwan’s film industry is progressing with each passing day thanks to the strong support provided by the government as well as the efforts of the local film industry. He said he senses a totally new climate in the local industry, and more and more films being produced here are meeting the needs of the local and international markets. Anthony Chaumuzeau, the Counsellor for Cooperation & Cultural Actions of the French Institute in Taiwan, also said that he is glad to see increasingly close ties between the two countries in cinematic and cultural exchanges. He added that the platform offered by the Cannes Film Market will help exhibit the broad-based development of Taiwan films and is sure to attract the interest and attention of even more international production companies.

Starting in 2001, the GIO each year has invested considerable manpower and resources in setting up Taiwan film booths at major international film festivals, including the Cannes Film Market, the Pusan Film Market, the American Film Market and the Hong Kong International Film Festival. In addition, the GIO has hosted Taiwan Night cocktail parties to promote Taiwan cinema and engage in cultural exchanges. This year marks no exception, as the GIO will again set up a Taiwan film booth at the Cannes Film Market to assist local production companies in promoting their films. In addition, the Taiwan Night cocktail party will be held on the evening of May 24th at the Majestic Hotel in Cannes. Michael Ching-long Lu, Taiwan’s representative to France, will host the event. High-ranking officials from various film festivals, well-known critics and directors, journalists, the Taiwan delegation to the festival and representatives from other nations are expected to attend the event.