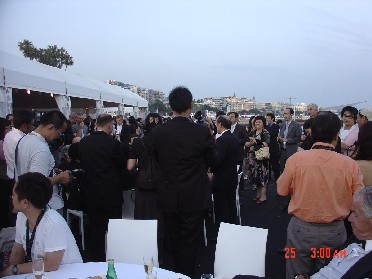 The Taiwan Night held at the 2007 Cannes Film Festival was a smashing success. The cocktail party nearly broke records for its length, and the atmosphere at the event was the most festive ever seen at a Taiwan Night. The event, sponsored by the Government Information Office, started at 8 p.m. on the evening of May 24 on the beach at the famous Majestic Hotel in Cannes, and did not conclude until 1 a.m. Over 600 guests and persons from the film industry attended the five-hour gala event. On the scene were famous Taiwanese directors Hou Hsiao-hsien, Tsai Ming-liang, and Huang Yu-shan, along with movie stars Yang Kuei-mei, Kang-sheng Lee, and Zhang Xiao-hui. The heads of the Venice Film Festival, the Pusan International Film Festival and the Nantes Film Festival also stopped by to pay their respects.

Among the nearly 100 receptions held by countries or studios attending the film festival, the Taiwan Night event was said to have lasted the longest. The event also featured fabulous decorations and outstanding service, not to mention a top-quality range of food and drink. Everyone attending the gala agreed that Taiwan Night was one of the most successful parties at Cannes this year, making the receptions held by Hong Kong and South Korea pale in comparison. Director Hou Hsiao-hsien's The Red Balloon held its premiere screening on May 17th. Meanwhile, Tsai Ming-liang participated in an activity celebrating the 60th birthday of the Cannes Film Festival, which ended on Sunday. Both directors stayed on in Cannes at their own expense and delayed their return to Taiwan in order to attend the Taiwan Night party. Without a doubt, the attendance of the two master directors created an even more festive atmosphere at the reception. Actress Yang Kuei-mei said that the event held by her country represented nothing less than Taiwan itself; the movie directors and stars were all there to support it. Zhang Xiao-hui attended Taiwan Night for the second consecutive year, making the evening gala all the more radiant.

During the evening the head of the Venice Film Festival, Marco Muller, asked Peggy Chou, the director of the GIO's Motion Picture Department as to the status of Chang Tso-chi's film "Butterfly". Mr. Muller expressed that Chang Tso-chi has a unique style and he is eagerly awaiting the arrival of Butterfly. He also predicted to others attending Taiwan Night that there is a good chance that Butterfly will be included in the competitive section of the Venice Film Festival. The head of the Pusan International Film Festival, Kim Dong Ho, accompanied Hou Hsiao-hsien for much of the evening, representing the close friendships maintained between people involved in Taiwanese and international cinema.

Michael Ching-long Lu, Taiwan's representative to France, doubled as the host of the party. In his remarks to the gathering made in French, English and Chinese, he said that a total of 44 Taiwan film companies and 64 Taiwan-made films entered this year's Cannes Film Festival, signifying the gradual revival of Taiwan's film industry. As a result, the theme of Taiwan in joining this year's events was "The Blooming of Taiwan Cinema."

One particular event worth noting is that the Cannes Film Festival raised the ROC flag at its global village this year, delighting the nearly 100 representatives of the Taiwanese film industry in Cannes this year. This was the first time in two decades that the ROC flag fluttered on the beach at Cannes among the flags of other nations. This not only signifies the increasing influence and strength of Taiwanese movies at the film festival, but also shows the increasing importance of Taiwanese cinema on the international stage.