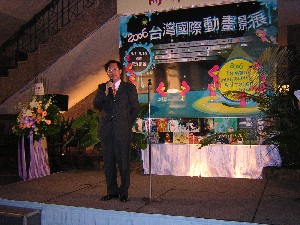 The 4th Taiwan International Animation Festival organized by Chinese Taipei Film Archive (CTFA) and conducted by Government Information Office (GIO), as well as many well-known sponsors and collaborators, will take place in Warner Village Cinemas Taipei Hsinyi from Sept. 1 to 10. In order to make the message known by the public, Chinese Taipei Film Archive (CTFA) holds inauguration press conference and reception in Warner Village Cinemas Taipei Hsinyi and Agora Garden on Sept.1 respectively. Except for Winston Lee, director of CTFA, Wang Chao-li, chairman of Warner Village Cinemas, and the special guests from around the world, the special guest Pixar Animation Studio also attended the press conference. In the meantime, Cheng Wen-tsang, minister of GIO, who has just come back from visiting abroad, especially gave his regards to the event. “TIAF allows the public to see lots of diverse and superior animation films. For the most part of Taiwan’s animation industry of this stage, substitute industry is the basis. However, when it comes to marketing and creative talents, we are in a weaker situation compared with other countries. By means of collective efforts from the industry, we hope Taiwan’s animation films can make Taiwan a brilliant star around the nations in the future.” announced by Cheng Wen-tsang in the press conference. It’s an honor of him to lend the site for screening, and he hope there are more chances for aiding Taiwan’s animation films in the future, Wang Chao-li said, as he explained in the press conference. 2006 Taiwan International Animation Festival, which includes 332 selected masterpieces from 32 countries, and the most distant film came from Ukraine, is abundant and spectacular. In addition to opening and closing films, there are 10 sections. “Taiwan Competition Final”, “International View Finder”, “Asia’s View Finder”, “Focus on Director”, “Focus on Studio”, “Awarded Films of Festival”, “Fresh Power”, “Variety Catch”, “Children & Teenagers’ Program” and “Midnight Program”. If it sounds appealing to you, be sure to seize the chance and go to the cinema. If you miss it this time, you have to wait for a whole year to savor it!