Celebrating Taiwanese films at Venice Film Festival: “I Don’t Want to Sleep Alone” and “Do Over” 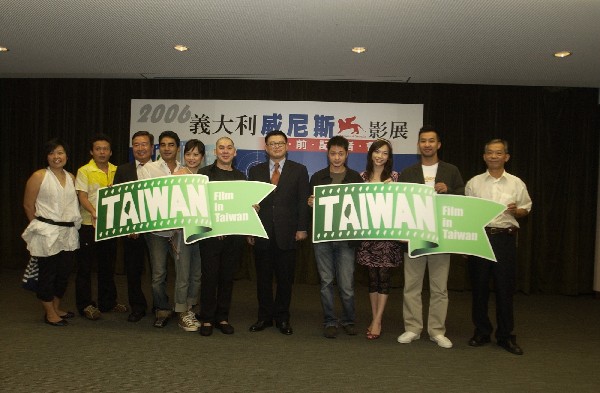 The Government Information Office (GIO) held a press conference in the morning of Aug 31 in support of two Taiwanese entries in the 2006 Venice Film Festival. To express Taiwan government’s support and congratulations on two filmmakers Tsai Ming-liang and Cheng Yu-chieh, William J. Yih, GIO’s Deputy minister, conducted the press conference. Tsai’s “I Don’t Want To Sleep Alone” is a competition entry while Cheng’s, “Do Over” was selected in the International Critics Week section of the festival. Both filmmakers and main cast of the films were present at the meeting.

Out of the 21 films in competition this year, Yih pointed out at the meeting, 4 were Asian productions, including Taiwanese film “I Don’t Want to Sleep Alone”. The film is seen as a strong contender for the festival’s top honor Golden Lion Award and is expected to raise attention in the international film circle. Tsai Ming-liang is a Venice frequent. His “Vive L’Amour” was the winner of Golden Lion Award in 1994, and his “Goodbye, Dragon Inn” snatched Fipresci Award at 2003 Venice Film Festival. The new film “I Don’t Want to Sleep Alone” marks Tsai’s third entry in Venice.

“Do Over” is the top prize winner of 2006 Taipei Film Festival, and has also been invited to both Toronto Film Festival and Pusan International Film Festival. “With the best wishes and encouragement of Taiwanese people and the government, we hope both films will win international recognitions and return with prize honors,” Yih said.

Yih added that film is an important medium to promote a country’s culture and inter-culture exchange. “Through films we retrospect ourselves, also set up perspectives to the world. Films enrich and diversify our lives; and our lives find resonance through the artistic expression of the filmmakers,” he said. For the reason, Yih expressed respect and gratitude to all cast and crew of the two films.

“I Don’t Want to Sleep Alone” is selected in the international competition category at the Venice Film Festival, and will compete with other 21 films vying for the Golden Lion Award. Director Tsai brings his actors Lee Kang-sheng and Chen Hsiang-chi to the press conference. Tsai shows gratefulness to the NT$8 million subsidy endorsed by the GIO. He is also thankful for GIO’s liberal attitude dealing with his previous work “The Wayward Cloud”. Taiwanese society was shocked by this bold and avant-garde film, but also learned to be more mature and tolerant. GIO’s continual support to arts and cultural films has let filmmakers freely express their artistic creativity without any constraints, as a result making numerous acclaimed films. These government-subsidized films have, one after another, won international recognitions and brought honors to the country.

“I Don’t Want to Sleep Alone” is my 9th film and can be the most mature among my works, also the most devoted work by me and the film crew. The film may be not easy to understand but I believed it has demonstrated growth and progress of my works,” said Tsai Ming-liang at the press conference.

As for some controversial pictures in the film and its poster of “I Don’t Want to Sleep Alone”, Tsai also hoped the GIO could, considering the filmmaker’s efforts and devotion to art, stay open and tolerant during the censoring process. In response, the GIO official said that the film had passed the reviewing process and was just approved uncut with an R-rated screening license. However, the poster of the film has not applied for approval. Currently, film posters are approved by the standard of “General” rate. The poster of “I Don’t Want to Sleep Alone” will be reviewed by the same regulation, the GIO said.

Another Venice participating film “Do Over” is the first feature-length film of director Cheng Yu-chieh. Cheng said he was honored being selected in the International Critics’ Week section, and was grateful of the works of his actors, as well as the assistance from the GIO. “Going to Venice, I’ve prepared a mind of learning, and I hope to see and appreciate many international films that are different from Taiwan cinema,” Cheng said. Two actors of the film Hsu An-an and Huang Chien-wei also presented at the meeting. They said they were thrilled and honored to participate in the film.

In recent years, signs have indicated that Taiwan’s film industry has gradually revived. Taiwanese films are extensively seen at international film festivals. In order to broaden the horizon of Taiwan Audio-visual industry, the GIO, starting from last year, has integrated Golden Horse Awards, Golden Bell Awards, Taipei Film and TV Festival and Taiwan Film and TV Investment Forum into a “Taiwan International Film＆ TV Expo”. In its first year, this integrated event wins support and positive response from the industry. This year, GIO will continue to hold the event and will incorporate it as part of the 51st Asia Pacific Film Festival events. Thus this year, the Film＆ TV Expo is expected to be larger-scaled and more international, creating multiple benefits and opportunities.