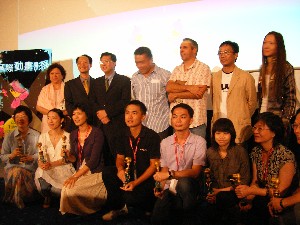 The 4th Taiwan International Animation Festival organized by Chinese Taipei Film Archive (CTFA) and supported by Government Information Office (GIO) took place from Sept. 1 to 10 in Warner Village Cinemas, Taipei. This year’s TIAF the most special is “Taiwan Competition” aims at Taiwanese animation. There are 279 entries and the jurors have selected34 workers competed for 8 prizes.

“TIAF allows the public to see lots of diverse and superior animation films. When it comes to marketing and creativity, we are in a weaker situation compared with other countries. However, from the works this year, we can see the gradual development of Taiwanese animation. Moreover, by means of competition, we hope it can promote competitiveness and push forward Taiwan’s animation industry.” addressed by Cheng Wen-tsang in the ceremony. In the end, Cheng praised its success and NT$2 millions box office breakthrough, which shows the audience getting more and more, and Taiwan’s animation industry is rising and flourishing.

“Taiwan International Animation Festival” is the only Taiwanese film festival that focuses on animation. Works combined different cultures, races and refined art from the world were selected in the festival, and through it Taiwan has more chances exchanging new ideas with other countries. At the moment, many film festivals had invited these final works to take part in their festival, among which are China Changzhou International Animation Art Festival (CICDAF) and Cannes Film Festival’s “Semaine internationale de la critique” Through the recommendation of TIAF, Taiwan’s animation works can possibly be seen in other film festivals.

Although TIAF is closed in Taipei, animation fans in central and southern Taiwan still have the chance to see the works. 2006 TIAF will barnstorm in Wonderful Cinemas, Taichung from Sept. 15 to 21 and in Kaohsiung Municipal Film Archive from Sept. 17 to 30. Anyone who is interested in it, do not lose the chance to see it. If you miss it this time, you have to wait for a whole year!