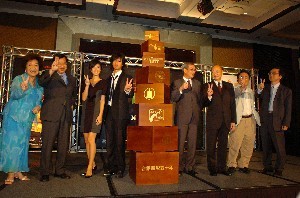 Unveiling the 2006 “Taiwan International Film and TV Expo”, the Government Information Office (GIO) held a press conference in Taipei on Oct 12. The GIO announced that November would be the glitter month for Taiwan because the most important entertainment events will kick-start in November.

Cheng Wen-tsang, minister of GIO and the host of the integrated event, unveiled the themed posters for the event, including the main poster “Spotlight on Taiwan, Visions for Asia” and Entertainment Ambassador poster. He heartily invited guests from home and abroad to participate this year’s bigger-scaled entertainment expo.
Taiwanese stars Chen Bo-lin and Guei Lun-mei, who starred as the golden couple in the 2002 film “Blue Gate Crossing”, reunited at the press conference and they will serve as Entertainment Ambassadors for the expo.

Aiming to be the world-class film and TV carnival held in Taiwan, these five major events are expected to draw record-high participants with grandeur scales. This ensures the whole November to be the film and TV month in Taiwan.

The GIO hopes that the “2006 Taiwan International Film & TV Expo” will not be just a formal integration of the five events. Through the combination of resources between government and private sectors, the GIO hopes the event to successfully help with international exchange and international marketing. The event aims to become the grand meeting point for industry people as well as a star-studded gathering, letting Taiwan to be a main focus of Asian or world film and TV market.
Following last year’s “Fa” (meaning prosperous) as the theme concept of the event, minister Cheng said this year’s theme concept would be “Tsai” (meaning talent) and the keynote under the concept would be “Tsai Kao Pa Tou -- Spotlight on Taiwan．Visions for Asia.”

“Tsai Kao Pa Tou” (talents as high as eight rice bins piled up) is an idiom in Chinese, meaning distinguished and multi-talented. Taiwan has been known in the world for its rich talents and creativity. Through the Film & TV Expo, Taiwan’s talents can link with Asian and global industry, developing greater film and TV works. The keynote is also exemplified in the visual design of the poster, the shape of eight rice bins piled up, forming a giant tower. This image resembles the shape of Taipei’s landmark building, Taipei 101. It also signifies accumulation, harvesting and uplifting, expressing a typical Taiwanese spirit.

Apart from Chen Bo-lin and Guei Lun-mei, three other stars, Chang Chen, Angela Chang and Mike Ho are also recruited as Entertainment Ambassadors for the event. With their successful film or TV works and their popularity, the GIO hopes the five stars to make the expo a more people-friendly event. On the other hand, the five, led by Chang Chen who already built up his international reputation, will signify the young spirit and energy of Taiwan film & TV industry, that is powerful, rich in talents and flourishing.

Currently working in Mainland China, Chang Chen, Angela Chang and Mike Ho were unable to present at the press conference and Chen Bo-lin and Guei Lun-mei represented the five ambassadors. The two young stars have grown mature from the student looks in their maiden work “Blue Gate Crossing” and have become major Asian stars. The two especially dressed up for the press conference and wished success for the upcoming event.

At the press conference, Wang Tung, chairman of Golden Horse Film Festival Executive Committee, Yeh Chien-chao, director of organizing committee of Asia Pacific Film Festival, Lai Kuo-chou, chairman of Taiwan Television Corporation and Taiwan Film and TV Project Promotion, and Chou Yu, director of Taiwan Performers’ Association and organizer of the Retrospective of Taiwanese Dialect Films, have each briefed about their representing events. The conference ended with a symbolic gesture, as eight distinguished guests, led by minister Cheng, lifted up eight rice bins and piled up a tower shape. The guests reiterated the keynote of the expo and expressed high hopes for the event.