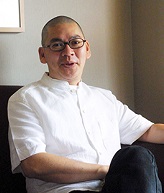 TSAI Ming-Liang was born in Kuchin, Malaysia where his grandfather and father had been settled. He arrived in Taiwan in 1977. Graduated in 1981 from Department of Dramatic Art at the Chinese Culture University, TSAI wrote plays, and directed 3 plays, including "Instant Bean Sauce Noodle,"(1981) and "A Sealed Door in the Dark"(1982), on stage that humorously dealt with issues such as lonelyness and frenetic urban styles in contemporary Taiwan society. In 1983, he was the writer, theater director and the one and only actor for "A Wardrobe in the Room," which was about the city dweller voluntary entrenchment behind solitude, which became recurrent in his film works. TSAI then devoted ten years in directing television dramas and film scripts. In 1989, he directed his first made-for-TV film "Corners of the World".

For "The Kid," (1991) one of his TV films, TSAI Ming-Liang discovered LEE Kang-Sheng in a videogame parlor. Without any acting training, LEE became his favorite actor. For him, TSAI wrote "Rebels of the Neon God," and starting from this film, LEE has been Xiao-Kang, the central character in all of TSAI Ming-Liang's films. In 1993, TSAI's first feature film "Rebels of the Neon God" won the Tokyo Broze Prize in Tokyo International Film Festival. In 1994, with "Vive l'Amour", he received the Gold Lion Award at Venice Film Festival. In 1997, "The River" won the Silver Bear Award at Berlin International Film Festival and the Fipresci Award. In 1999 TSAI made "The Hole" and received Fipresci Award in Cannes for it. In the beginning of 2001, TSAI Ming-Liang finished his fifth feature "What Time is it There?" and won the Technical Prize for Sound Recording in Cannes in 2001. He completed a short film "The Skywalk is Gone" in 2002. His latest film "Goodbye, Dragon Inn" was shown in 2003. At the same time, he produced LEE Kang-Sheng's first directing feature film "The Missing." In 2005,TASI Ming-Liang has finished his new film work"THE Wayward Cloud."