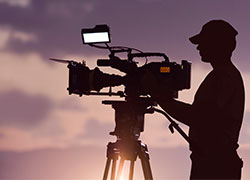 Lin Che-chiang is an audio visual worker who started to engage in film production in 1989. He became a cinematographer in 1992, and has shot for numerous music videos, TV commercials and films. Lin also has a long-term collaboration with director Hsiao Ya-chuan, shooting several of Hsiao's films, including "Father to Son," "Mirror Image," and "Taipei Exchanges." Having worked in the industry for over 25 years, Hsiao has accumulated rich experience in the film industry.