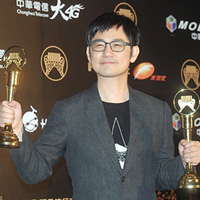 Born in 1973, Chen Chien-chi is a notable music composer in Taiwan. He is also a music arranger, keyboard player, album producer, and concert music director. He also produces soundtracks for film, television, advertising, and theater. He has served as the judge of the Golden Horse Awards and music director of a number of film scores. He has been nominated by the Golden Horse Awards for best original film score.