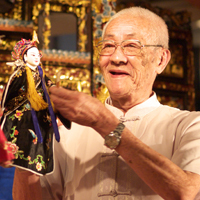 Born to puppet master Lee Tien-lu in 1931, Chen Xi-huang is a Taiwanese glove puppeteer. Chen has been dedicated to puppetry performance and preservation for years, and had performed in countries including Thailand, France, the Netherlands, and Italy, where his outstanding performance was well-received. He also played in films, such as "Sweet Degeneration," "Footstepsin the Rain" and "The Cabbie." He has won Best Supporting Actor at the Changchun Film Festival in China for "Such A Life" in 1998. "Fater," a documentary that took 10 years to record Chen's personal history, the family of puppeteers, and the development of traditional art and culture in Taiwan by director Yang Li-chou, will be released in 2018.

Documentary
2011 "Taiwan and its Puppets"