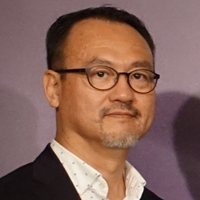 The founder of Joint Entertainment International Inc.,James Liu has been working in the film industry for decades and has excellent theoretical and practical abilities. He was a director, screenwriter, program director of film channels, film marketing director, etc. and has directed the film Flame in 1997. In 2005, he founded Joint Entertainment International Inc. which focused on independent film distribution and international sales.In addition to introducing high-quality foreign films, he is also committed to promoting Taiwanese films to the international market. In 2016, he founded Joint Pictures Co., Ltd. which focuses on film production and actively participated in international film co-productions.