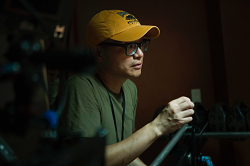 Ching-Shen CHUANG earned a master’s degree from Department of Filmmaking of Taipei National University of the Arts with a major in directing. He was the assistant director of the film 7 Days in Heaven as well as the producer and cinematographer of the film Jump! Boys (Golden Horse Award for Best Documentary Feature). His first short film The Eighteenth Birthday Party was shown at Edinburgh International Film Festival and Taipei Film Festival and his television films have been nominated for Golden Bell Awards. His first feature film High Flash (2018) was executive produced by three senior Taiwanese filmmakers: Sylvia Chang Ai-Chia, Tien-Tsung Ma, and Liao Qing-Song. It was selected as the closing film at the 2018 Taipei Film Festival and was nominated for Best First Feature Award and Best Feature Award at the Toronto Reel Asian International Film Festival. His continuous cinematic effort has led to two recent films: The Magnificent Bobita and S-Girl.