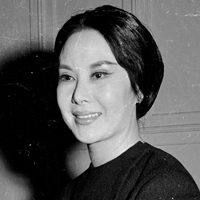 Li Li-hua was born to a family of Chinese opera in 1924. In 1940, she entered the Shanghai Yi Hua Film Company, and emerged as an actress with "Three Charming Smiles." She later moved to Hong Kong to develop her career due to political turbulence, and had starred in iconic films, including "Little Phoenix," "The Magnificent Concubine" and "Empress Wu." Among them, "The Magnificent Concubine" became the first Chinese film to win award at the Cannes Film Festival. Apart from her popularity in the Chinese film industry, she was also invited by director Cecil B. DeMille of "The Ten Commandments" to partner with director Frank Borzage, who won the 1st Oscar for best directing, to play the leading role in "China Doll," which made her the first Chinese actress to enter the Hollywood. Li had devoted her life to the showbiz for 40 years and had played numerous roles in over 120 movies, dominating the film industry across mainland China, Taiwan and Hong Kong for half a century. Thus, she was given the name "the evergreen tree in the film industry." She had won the Golden Horse Awards for best actress for "Between Tears and Smiles" and "Storm Over the Yangtse River," as well as the Lifetime Achievement Award at the Golden Horse Awards and Hong Kong Film Awards. She passed away in March 2017 in Hong Kong at the age of 93.