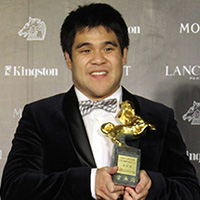 Huang Yu-siang, who was born in 1988, received a bachelor degree from the Department of Music at the National Taiwan University of Arts. When he was a college student, he met Chang Jung-chi, who was interested in Huang's life story, and thus made a short film titled "The End of the Tunnel" based on Huang's personal history in 2007. This film was nominated for the Golden Horse Award for best short film and earned the Best Short Film Award at the Taipei Film Festival. Being deeply touched by "The End of the Tunnel," Hong Kong director Wang Kar-wai encouraged Chang to develop the story into a feature film, prompting the birth of "Touch of the Light." Starring Sandrine Pinna and Huang Yu-siang, the heartwarming story received overwhelming responses from the audience. Huang has also thus won the Outstanding Taiwanese Filmmaker of the Year at the 49th Golden Horse Film Festival in 2012. Huang continues to be productive in terms of music creation.