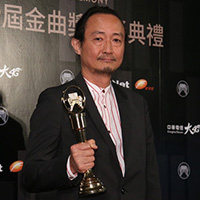 Born in 1966, Baby Chung is a notable music producer specializing in music composition, arrangement and records production. He used to accompany music artists on keyboard for several concerts. He was also employed by record labels to arrange numerous songs, such as "Common Jasmin Orange," "Blue and White Porcelain," and "Magician" in collaboration with Jay Chou. He has won the Golden Melody Awards for best music arrangement twice for "Nunchucks" and "Prague Square." In 2007, he co-founded Go Ahead Music Co. Ltd. with Kay Huang. He has dedicated to creating pop music and earned several Golden Melody awards and nominations.

So far, he has produced original soundtracks for films, including "Hear Me," "Wansei Back Home" and "GF‧BF," and earned several recognitions for his talent in music creation. For example, he has earned the Golden Melody Awards for best instrumental album for "Orz Boyz !," "Joyful Reunion" and "The Long Goodbye." He was also nominated for Best Original Film Score at the Golden Horse Awards for "The Long Goodbye."