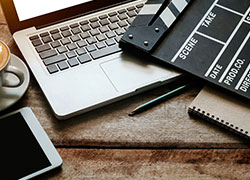 Graduated from Department of Radio, Television and Film of Shih Hsin University and majored in filmmaking,Shih Yea-Chun is a producer of the new generation in Taiwan. She is passionate about image creation and has widely participated in diverse productions of a number of films, TV series, web series and documentaries.Her experience of drama production is solid and rich, and the commercial value and reputation of the film and television works that she participated have both been very successful.