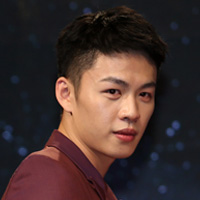 Lee Hong-chi was born in 1990 and graduated from Chinese Culture University with a degree in Chinese drama. He was discovered by casting director Gene Yao, who assigned him to play the leading role in "Thanatos Drunk," for which he earned the Golden Horse nomination for best new performer and best leading actor. As an up-and-coming actor, Lee has starred in several films so far, including "Cities of Last Things," "Miracles of the Namiya General Store" and "Long Day's Journey Into Night."