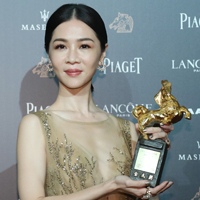 She plays the heroine, Chia-Ling Chen, in TV series The Making of an Ordinary Woman, and was well received and loved by the audience. With this role, she was nominated for Best Leading Actress in a Miniseries or Television Film of Golden Bell Awards. In 2020, She was nominated for Best Supporting Actress of Golden Horse Awards with Little Big Women, and won Best Supporting Actress of the 12th Youth Film Notebook Annual Awards.