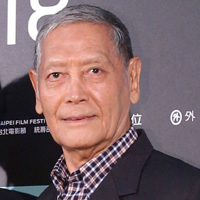 Shih Chun is chairperson of King Hu Foundation. Graduated from the Depart ment of Animal Husbandry at National Taiwan University, he sat for the exmination held by United Internationa Pictures(Taiwan) in 1965. He had his debut as leading actor in King Hu's film Dragon Inn(1967). Since then, he worked with King Hu for a long time. He was the leading actor of several kung fu movies, including A Touch of Zen, Raining in the Mountain, and Legend of the Mountain. In 2003, he worked with Director Tsai Ming Liang in his film Goodbye, Dragom Inn. He served on the Chinese Language film Jury of the 23rd、35th Golden Horse Awards.