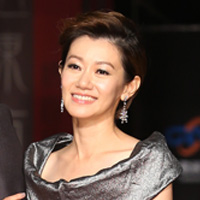 Chou is a star in many TV series (“Hospital Stories”, “Last Train Heading for the North” for Public TV, and “Gangster Professor”, “Falling in Love with the Cocky Boy”, and “Sunflower” for TTV) and spokesperson for many advertisements. She had an extensive experience in acting and is praised as the most promising young star. “The Sound of Wave from that Summer” is her first movie appearance. Her performance of a role over her actual age and her interpretation of the character’s internal emotions are delightfully refreshing.