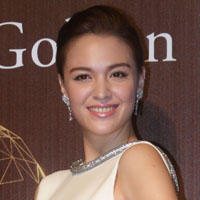 Sandrine Pinna is a half-Taiwanese and half-French actress born in 1987. She made her debut with short film "Fluffy Rhapsody" by Wu Mi-sen at the age of 11. Since then, she has played in several TV dramas, films and TV commercials. After graduating from Shih Hsin University with a degree in radio, television& film, she continues the career as an actress. Her acting has been recognized by several films festivals, with "Miao Miao" and "Yang Yang" earning Golden Horse nominations for best leading actress. In 2012, she won the Best Actress at the Taipei Film Festivals for "Touch of the Light."