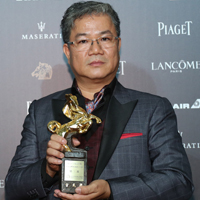 Saburo Liu is a senior focus puller who has engaged in the film industry for years and participated in filming numerous films. With good technique in pulling focus and image aesthetics, the films, including "Xiao Mei," "High Flash," and "Cities of Last Things" he participated in filming consecutively in 2018 has earned him recognitions, including the Golden Horse Award for outstanding Taiwanese filmmaker of the year.