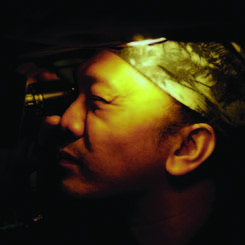 Born in 1973, HUANG A-yao obtained an MFA from the Tainan National University of the Arts. A documentary filmmaker, HUANG had been a board member of the Taipei Documentary Filmmakers' Union. His works are known for the satirical tone used to portray the dream and the disappointment of youth and the humorous narrative that enhances the preposterous situations one often faces in life. HUANG’s Bluffing (2005) won Best Documentary at the Golden Harvest Awards. With his unique film aesthetics, his visual poem Nimbus (2010) shot by himself, won the Jury Prize at the 2010 Taiwan International Documentary Biennale, Best Cinematography at the Golden Harvest Awards and several other international film awards. In 2010, Tavalu (2010) bagged the Grand Prize and Best Documentary at the Taipei Film Awards. The Great Buddha (2010) is HUANG’s first narrative short film, and it was nominated for Best Live Action Short Film at the 2015 Golden Horse Awards. In 2015, HUANG made Yonaguni, the first Taiwanese documentary that has no narrative, no dialogue, no narration, no music and no protagonist. The 57-minute documentary consists of only 55 shots, depicting the moods of an island with pure image.