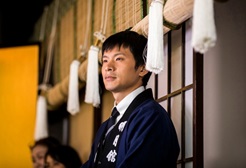 Born in 1984, Chun-Yao Yao graduated from School of Theatre Arts of Taipei National University of the Arts, and he has participated in all kinds of stage plays, films, TV series and commercials. In 2006, he acted in the short film, Mei, which was directed by Arvin Chen and won Silver Bear Award at the 57th Berlinale Shorts Competition. In 2009, Arvin Chen adapted Mei into feature film, Au Revoir Taipei, and Yao’s natural and vivid acting is highly appreciated by the director, and regarded as the best candidate for the leading actor. He even took the stage on behalf of Au Revoir Taipei to receive NETPAC Award at the 60th Berlin International Film Festival. In 2014, he made the crossover to become the host of TV program, Stories in Taiwan, and won Best Host in an Itinerant Programme of 51st Golden Bell Awards. In 2017, he resigned the TV program and returned to acting. In 2020, he won Best Leading Actor in a TV series of the 55th Golden Bell Awards with The Mirror.

This photo is provided by Sky Films.