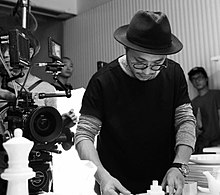 Undoubtedly one of the most well respected art directors in Taiwan, Chih -Da Kuo has been at the forefront of the industry since he began working. The top directors in the region have taken note of his uncompromising attention to detail and ability to manifest their vision, and his is the first name mentioned for the most unique and challenging projects in music videos, television commercials and film. After garnering several music video awards for his works for the top artists in the region, he turned his focus to television commercials, where he preceded to win awards for his art direction 3 years running.

In 2007, he art directed the film, Secret, which broke box office records in both Taiwan and China. The sets were so true to life that many refused to believe that they were constructed. Organizations outside of the filmmaking industry have also taken notice of Kuo’s work. He has been commissioned to design a top hair salon’s flagship store, and an installation for bookstore and Taiwan cultural Mecca, Eslite. He has also been invited to lecture to students and professionals by various associations. Always striving for excellence on every project, Kuo scours each script for clues as to how interpret the film’s message and theme in his art. The maxim by which he conducts himself sums up his attitude - to treat every film as if it’s his last.