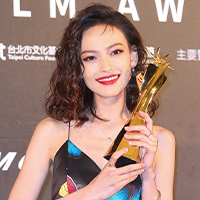 Born in 1986 and graduated from College of Kinesiology of University of Taipei, Yi-Ti Yao is an actress. She has been trained as a handball player since elementary school and was selected into the National Handball Team of Taiwan. In 2014, she gained attention for her performance in the movie Dream Flight co-directed by Khan Lee and Aozaru Shiao. Later, she starred in The Cat in the Closet of Public Television Service’s Life Story, which was nominated for Best Narrative Feature of the 18th Taipei Film Awards and several awards of the 51st Golden Bell Awards. In 2017, she and Chen Chang starred in Mr. Long directed by Japanese director Sabu, which was in the main competition of the 67th Berlin International Film Festival. For her performance in The Gangs, the Oscars, and the Walking Dead, she was nominated for Best Supporting Actress of the 56th Golden Horse Awards and won Best Supporting Actress of the 22nd Taipei Film Awards.