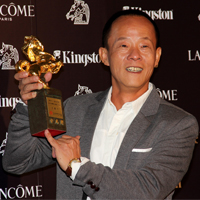 Born in 1965 to a father who was a gaffer, Wang Wei-liu started his career in the film industry after finishing junior high school and has learned from his uncle Liao Pen-jung, who is a cinematographer. He has tried most of the film crew jobs, and chose to become a production coordinator in the end. He has been working in the film industry for over three decades, and thus is given the name "brother Liu." He has experienced the rise and fall of Taiwan cinema, and participated in producing for numerous films, including those by Hou Hsiao-hsien, Chin Ao-hsin, Wei Te-sheng, Tsai Ming-liang and Lin Shu-Yu. Among them, he collaborated with Hou most often. He also made some cameo appearances. In 2011, he was honored the Outstanding Taiwanese Filmmaker of the Year at the Golden Horse Awards in 2011.