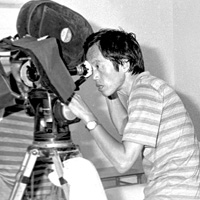 Born in 1939 in Taichung, Chen Kun-hou (陳坤厚) was admitted by the Central Motion Picture Corporation in 1962 to learn cinematography. His first cinematography work was the film ""Story of Mother (母親的三十歲)"" by Sung Tsun-shou (宋存壽) in 1971. Later he collaborated with director Li Hsing (李行) to make several films including ""He Never Gives Up (汪洋中的一條船),""and ""The Story of a Small Town (小城故事)."" Since 1979, Chen had also collaborated with director Hou Hsiao-hsien (侯孝賢) for a series of romance films written by Hou and shot by Chen. All the films they made together performed well at the box office.

In 1982, Chen and Hou established a film company and produced ""Growing Up (小畢的故事)."" The low-budget film became a blockbuster that was highly acclaimed. ""Growing Up"" won the Golden Horse Awards for best feature film, best director, best adapted screenplay in 1983, and became one of the most important works of New Taiwanese Cinema. They ended their collaboration in 1985 and developed their own movie styles later on.