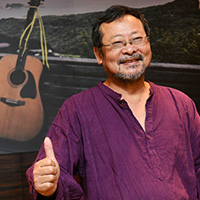 Born in 1956, Chen Ming-chang is a senior Taiwanese musician whose music talent has been well recognized. Chen started developing interest in music since he was in junior high school. He has created Taiwanese-language songs that are rooted in local culture. Some of his most celebrated works include "Chase Chase Chas" and "Odyssey."

In 1986, he composed film scores for Hou Hsiao-hsien's "Dust in the Wind," which became the first Taiwanese film to win the Best Score at the Nantes Festival of the Three Continents the next year.

Afterwards, he's continued to compose scores for films, including "March of Happiness" by Lin Cheng-sheng, "The Puppetmaster" by Hou Hsiao-hsien and "Maboroshi no hikari" by Hirokazu Koreeda, which were well-received by domestic and international film festivals.