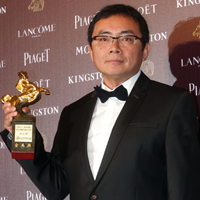 Huang Chih-ming was born in 1962 and received a bachelor's degree from the Department of Foreign Languages and Literature at Tunghai University. He has served as a producer for many important film production companies in Taiwan, and has worked with Taiwanese heavyweight directors, including Tsai Ming-liang, Chen Kuo-fu, Wei Te-sheng, Yee Chin-yen and Wang Shau-di. In 2002, he participated in producing "Double Vision," a film invested by Columbia Pictures. Some of his representative works include "Secret," "Cape No.7," "Seediq Bale" and "KANO." His rich experience in film production has earned him the Golden Horse Award for outstanding Taiwanese filmmaker of the year in 2014.