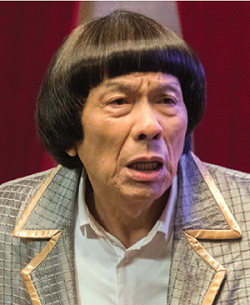 Born in 1946, Chu Ko-liang was a notable TV host in Taiwan. He was active in the show business in the 1980s in Taiwan and best known for his humorous and unique hosting style as well as his iconic hairstyle. He was most celebrated for hosting the "Chu Ko-liang Show." He also won Best Host of Variety Show at the Golden Bell Awards for "Zhu Ge Club" in 2010. Since 2011, he had starred in Chinese New Year films, including "Twa-Tiu-Tiann," "Night Market Hero" and "David Loman," which were blockbusters and well-received by Taiwanese audiences. Chu passed away in May 2017 at the age of 70.