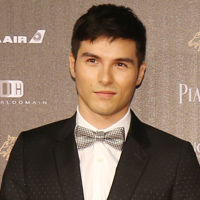 Rhydian Vaughan first made a name for himself in film, Winds of September, and his performance as the role Aaron in GF*BF earned him a nomination at the 7th Asian Film Awards. In 2013, he played the main role Gong Ming in the box-office hit, Tiny Times, and became very popular in China, Hong Kong and Taiwan. He can speak multiple languages, and except Chinese and English, he can also speak Taiwanese, such as in films Monga and GF*BF, and Japanese in TV series Die Sterntaler. He is also an excellent guitarist. In high school, he participated in Asian Beat Band Competition held by Yamaha Taiwan, and won Best Guitarist Award. He is a versatile actor.