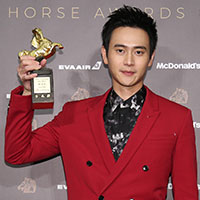 Born in 1988, Liu Kuan-Ting graduated from Department of Motion Picture of National Taiwan University of Arts. In 2015, he followed “Q Place”,a performing program set up by director Wang Shau-di, and participated in many TV series of Q series, gradually emerging in the film and television industry. He won Best Supporting Actor in a Television Series of the 53rd Golden Bell Awards with A Boy Named Flora A, and Best Supporting Actor of the 56th Golden Horse Awards with A Sun.