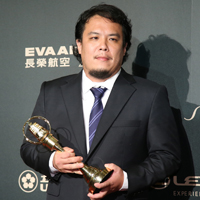 Liu Chen-wei, who holds a bachelor's degree from the Department of Radio, Television and Film at Shih Hsin University, is a gaffer who has participated in making TV commercials, TV productions, and films, such as "The Blue Choker" and "Let's Cheat Together." He has earned several Golden Bell nominations for best lighting, and won the award for "Upstream" in 2017.