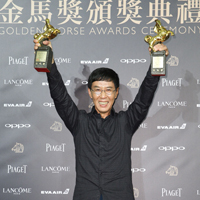 Lin Sheng-xiang is an indie musician who was born in Meinong of Kaohsiung City in 1971. He often writes songs in the Hakka language to express his care for the land, environment, and farmers in Taiwan. In his career that spans for more than two decades, he has won eight Golden Melody Awards. In 2017, he garnered the Golden Horse Awards for best original film score and best original film song for the original sound track of "The Great Buddha +."