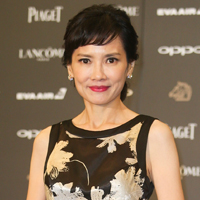 Shiang-Chyi Chen is an actress of stage and screen. A graduate of Taipei National University of the Arts, she has received rigorous acting training and performed in many stage plays. By chance, when she followed the Shakespeare Acting Class in college, she was selected by director Edward Yang for the leading female role (“Qiqi”) in A Confucian Confusion. For her beauty and wonderful performance, she received many proposals to act in films, but she declined them all and opted for further studies in the U.S.

During her study in the U.S., she followed performing courses at HB Studio and Saratoga International Theatre Institute in New York, enriching and deepening her performance through strict training of voice and body language as well as the life experience of studying abroad. After obtaining a Master's Degree in Theatre Arts Education from New York University, she returned to teach at the Taipei National University of the Arts. In addition to starring in films, she was also active in theater and has performed in several classic plays.

This photo is provided by CNA.