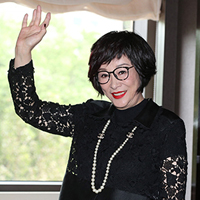 "Born in 1950 in Taipei, Hsu Feng was admitted by the Union Film Company in 1966. She made her acting debut in "Dragon Inn" by King Hu. The next year, she was casted by King to play a major role in "A Touch of Zen," in which her role as a swordswoman deeply impressed the audience. The film helped her rise to fame and gave her the opportunity to participate in the Cannes Film Festival. Since then, Hsu had continued a long-term collaboration with King.

She has starred in nearly 50 films in her career that spanned 15 years, and has won two Golden Horse Awards for best leading actress.

In 1984, Hsu shifted her career to become a film producer and executive producer. She founded Tomson Entertainment, which produced several notable films such as "Till the End of the World" and "Farewell My Concubine." In 2017, she received the Lifetime Achievement Award at the 54th Golden Horse Film Festival."