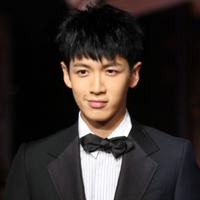 In 2022, he won Best Leading Actor of Taipei Film Awards for Till We Meet Again.

This photo is provided by CNA.