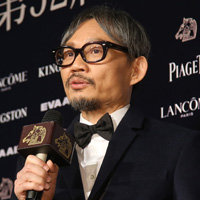 Chen Kuo-Fu is one of the leading figures in Taiwan cinema. An award-winning filmmaker, he has also worked as a documentarian, producer, author, university lecturer and film festival director.

Chen made his feature film debut in 1989 with "Highschool Girl"(國中女生). His second work, "Treasure Island"(只要為你活一天), was produced by the renowned director, Hou Hsiao-Hsien(侯孝賢), and premiered in competition at the 1993 Locarno Festival. In 1995, he made "The Peony Pavilion"(我的美麗與哀愁). The film starred his "discovery" actress Rene Liu(劉若英), in her acting debut.This, too, was invited to major international festivals, including Berlin and Toronto.

His next film, "The Personals"(徵婚啟事), again starring Rene Liu(劉若英), was invited to the 1999 Cannes Film Festival, as well as the festivals in Toronto, Calcutta, Rotterdam and others. It was honored with Taiwan's Golden Horse Grand Jury prize, along with nominations in five categories including Best Picture and Best Director.

Chen is the founder of Nan Fang Film Productions, and also serves as the Executive Producer/Director of the Taipei office of Columbia Pictures Film Production Asia (a division of Sony Pictures Entertainment).