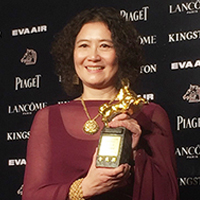 Hwang was born in Taiwan and received her training as theatrical production designer in Costume & Set in the United States. She works witn Hou Hsiao-Hsien since 1994, design films include "Good Men, Good Women" (1995) , "GOODBYE SOUTH, GOODBYE" (1996), "FlowerS of Shanhai" (1998), and "Millennium Mambo" (2001). Among them, "Good Men Good Women" and "FlowerS of Shanhai" received international award in Best Art Direction.

She is also the co-founder of SINOMOVIE in 2000, involved in producing feature films and advertising, and made her directorial debut in 1998 in both advertising and music video.