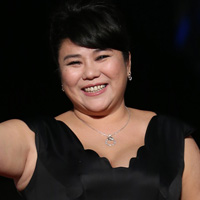 After graduating from the National Kuo Kuang Academy of Arts with a degree in dance, Lin Mei-siu joined the renowned Ma Lei-meng Dance Company, and used to work as backup dancer for popular female singers. She later met theater director Hugh K.S. Lee when she was working as the assistant to Pauline Lan. Since then, she had started learning stage performance from Lee and gained rich experiences in theater.

Later she was discovered by director Chen Yu-hsun, who cast her in several TV commercials, helping her to gain fame with a role in a cough drops commercial. After rising to fame, she has played various roles in theatrical productions, films, TV dramas, and commercials that were well-received. She has won the Golden Horse Award for best supporting actress for "Comes the Black Dog."