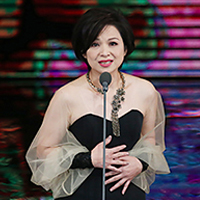 Born in 1959, Yang Kuei-mei is an actress who is active in both films and TV dramas. Yang started her acting career with sad roles. Her role as a mother in "My Beloved" broke the record at box office when it was screened in China in 1991 and gave her the title "Taiwanese mother." Since the 1990s, she has collaborated with prominent directors, including Wang Toon, Ang Lee, Tsai Ming-liang and Lin Cheng-sheng, who have helped her strengthen acting skill.