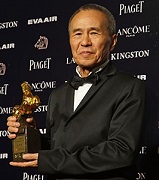 HOU Hsiao-Hsien was born on April 8, 1947 in Mei County, Guangdong Province, China. He moved to Taiwan with his family in 1948 after Taiwan returned to the Chinese rule following the Japanese surrender at the end of Second World War. HOU grew up in southern Taiwan until he served in the military for 2 years. It was during this period that he began to develop his interest in films. After being discharged from the compulsory military service in 1969, HOU was admitted to the Motion Picture Department of National Taiwan Arts Academy in Taipei. After graduation in 1973, he worked briefly as a salesman. Later he began his film career as script supervisor, assistant director and scriptwriter for veteran directors, such as Li Hsing. (李行) In 1978 HOU Hsiao-Hsien began his close collaboration with CHEN Kun-Hou. HOU was scriptwriter, and CHEN the cameraman. In 1980 HOU directed his first feature “Cute Girl,”(就是溜溜的她) which was a box office success. In 1982 his “The Green, Green Grass of Home” was commercially and critically successful. It was nominated for Best Feature Film and Best Director awards in the 19th Golden Horse Awards. It was the same year that Edward Yang (楊德昌) and three other young directors completed their debut omnibus film “In Our Time” (光陰的故事) The critical and commercial success of both “In Our Time” and “Growing Up” (小畢的故事) marked the beginning of Taiwanese New Wave movement. Under the influence of young filmmakers who had received film training in the U.S., HOU began to switch his filmmaking emphasis from commercial success to personal expression. The omnibus film “Sandwich Man” (兒子的大玩偶), which HOU co-directed with TSENG Chuang-Hsiang (曾壯祥) and WAN Jen (萬仁), was a ground-breaking work for Taiwan New Cinema. “The Boys from Fengkuei,” made in the same year, was the first film that HOU began to direct creatively rather than intuitively. This film, together with “A Summer at Grandpa’s,” “The Time to Live, The Time to Die” and “Dust in the Wind,” formed the trilogy of HOU’s autobiographic films. The theme on adolescence experience growing up in rural Taiwan and the unique style of storytelling are important marks of the Taiwan New Cinema, and are influential to the younger filmmakers in Taiwan. Of the ten films HOU Hsiao-Hsien has directed between 1980 and 1989, seven received best film and/or best director awards from international film festivals, such as Berlin, Venice, Hawaii and the Festival of the Three Continents in Nantes, France. HOU’s success at international film festival reached its peak in 1989 with “City of Sadness,” which won him the Golden Lion Award at Venice International Film Festival. “City of Sadness,” “The Puppetmaster” and “Good Men, Good Women” formed a trilogy that deals with the troubled history of recent Taiwan. In these films HOU had established his master status in international film circuit with his famous long and stillness takes, as well as his beautifully composed empty shots. He began to experiment with different styles of filmmaking in 1996 with “Goodbye South, Goodbye,” “Flowers of Shanghai” and “Millennium Mambo.” HOU Hsiao-Hsien is considered the leader of the Taiwan New Wave movement. He constantly helped other filmmakers in their works, as executive producer, producer, scriptwriter or actor. HOU likes to collaborate with his staple crew members, such as scriptwriter CHU Tien-Wen and WU Nien-Jen, Cinematographer CHEN Kun-Hou and Lee Pin-Bing, Sound Engineer TU Tu-Chi and Editor LIAO Ching-Sung. In November 1999 HOU established Sinomovie.com, a company specializing in producing and distributing domestic and foreign feature and short films. HOU also set up a website (http://www.sinomovie.com) to encourage the making of digital movies by young filmmakers using small format digital video equipment. In December 2001 HOU was involved in forming Taiwan Film and Culture Association to promote the film culture activities and to encourage the training of young filmmakers. One of the achievements of the Association was the renovation of the residence of former U.S. Ambassadors to Taiwan, which was transformed into Spot Taipei Film House, an art house for exhibiting non-commercial films. Starting from 2003 Taiwan Film and Culture Association is commissioned by the Department of Cultural Affairs of Taipei City Government to run the annual Taipei Film Festival. To celebrate the 100th birthday of Japanese director Yasujiro Osu in 2003 HOU Hsiao-Hsien was invited by Shochiku Co. to make a film “Kohi Jikou”(咖啡時光) in Japan with Japanese cast. HOU’s Spot Taipei Film House also ran a retrospective of all of Ozu’s surviving 37 film works.